We live in spiritually and physically perilous times. Spiritually, by many church leaders heavily redacting God’s Word to suit mankind. It’s become common practice for pastors and teachers to ignore the mature life-changing meat of the Word, for the comfort of teaching little to no sin and repentance thereof. Physically, by the increase of technological dependence, mandated vaccines, social media, 5G radiation, artificial intelligence (AI), GMO’s and hormone-laden foods, disease, wars, disasters, genome-editing, and more. These are the end-times. 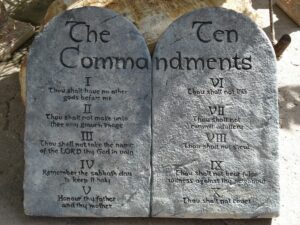 The Old Testament gave us the law, yet influential mega-church pastors like Andy Stanley tell believers that we should “Unhitch” from the Old Testament. But God’s Spirit said through Paul, we “would not have known sin except through the law” (Rom. 7:7). Equally important, the Old Covenant, like the New, is rich in revelations of end-time truths by which God intends for His elect saints to prepare to endure to the resurrection rapture at the last day, John 6:40, 44, 54.

The gospel of Jesus Christ encompasses the past, present, and future. We cannot change the past; we live in the present, and what we believe in the present either prepares us, or not for the future. Jesus promised His followers tribulation and persecution, but peace in the midst of it. Jesus’ own apostles suffered tribulation, persecution and even death, because “the word of God is living and powerful, and sharper than any two-edged sword, piercing even to the division of soul and spirit, and is a discerner of the thoughts and intents of the heart” (Heb. 4:12), hated by the unbeliever.

The full gospel is not a smorgasbord buffet where you take what you like but leave what you don’t. The gospel leading to eternal life is one of faithful endurance to the end. But many only hear a pleasingly partial gospel because it’s been watered down by false teachers to please the flesh, and thus “he has no root in himself, but endures only for a while. For when tribulation or persecution arises because of the word, immediately he stumbles” (Matt. 13:20–21).

In context to the last generation of this age, Jesus promised that “he who endures to the end shall be saved” (Matt. 24:13). But does your church hold to the tradition that you don’t need to endure to the end of the age because Christ will rapture you pre-tribulation? If so, that’s dispensational heresy, a conjured lie. Jesus said He gathers His elect “Immediately after the tribulation” (Matt. 24:29–31). Are you His elect? Do you believe Jesus or man? One cannot endure to the end by believing a lie, for it will be one of the causes of great offense leading the falling away.

The world now suffers end-time birth pangs, but pulpits, like the secular PC media, remain largely silent to the truth as pastors fear man more than God. Nature is in revolt. Apostasy rages in the church and immorality is normalized. LGBTQ gay pride now fills most major cities, even in Israel. Earthquakes are nearly too numerous to count, volcanoes intensify, wild weather and wildfires, floods and famines destroy crops. Seas are poisoned and beach their dead all over the world, while new strains of disease and pestilence plague the world. Yet, all this is deceptively normalized as most people are now desensitized to it all, even to Satan’s end-time deceptions.

It’s all in God’s end-time Word; the lukewarm effect. It’s part of the gospel message meant to prepare God’s elect to endure faithfully to the end. But the Church has the same problem as did ancient Israel – “An astonishing and horrible thing has been committed in the land: the prophets prophesy falsely, and the priests rule by their own power; and My people love to have it so. But what will you do in the end” (Jer. 5:30–31). And God also promised: “That which has been is what will be, that which is done is what will be done, and there is nothing new under the sun” (Eccl. 1:9). That’s why Jesus likened the end-times to the normalized days of Noah and Lot.

WW3 is close as nations rage against one another. The evils of war that destroy mankind is one of Satan’s ways of destroying humanity made in the image of God. But “though we walk in the flesh, we [believers] do not war according to the flesh. For the weapons of our warfare are not carnal but mighty in God for pulling down strongholds, casting down arguments and every high thing that exalts itself against the knowledge of God, bringing every thought into captivity to the obedience of Christ” (2 Cor. 10:3–5). Christians, that’s God’s Word and He means it, yet many desecrate the pulpit by applauding Christians who wage war, death and destruction to enemies.

That Christ died and rose again for our sins is the first of the gospel; repenting, believing and obeying the testimony of Christ and His Holy Spirit, and making disciples of Christ is second; and believing Christ’s post-tribulation resurrection rapture and preparing to endure to the end of the age as He taught is the third. The first two are essential to the faithful endurance of the latter.

Many Scriptures from both the Old and New Covenants teach about the end-times, and these are for the benefit and preparation of believers, and to lead unbelievers to true saving faith in Christ. Yet, many churches are sadly ignoring all the warning and stop signs God gives in His Word for the protection of the elect. What about you, is your church preparing you to endure to the end of this present age? Are you being taught according to the Word and Spirit of God things promised by God for the tribulation and times of the end, i.e. the Seal, Trumpet, and Bowl Judgments?

Know this: Jesus’ Olivet Discourse, The Revelation of Jesus Christ, and numerous other end-time teachings are for the equipping of God’s saints for the end-times, not for unbelieving Jews as taught by Darby’s and Scofield’s dispensational heresy. The truth of Jesus’ testimony for the times of the end is an unpopular message. It doesn’t tickle the ears. It doesn’t fill church coffers with big money to run man’s business-styled, all-American, people-pleasing church.

Many will be caught in “the falling away” (2 Thess. 2:3) because few pastors and teachers loved people enough to teach them God’s truths for the end. Meditate on Jer. 5:30–31 and allow God’s Spirit to move you to a place where you will be taught things that must come to pass – to a place of teaching that loves you enough to speak the truth and prepare you in the knowledge of Christ that you and your loved ones may endure to the end of this present evil age – to a place that will teach you how to find the safety and provision of God for the last 3 1/2 years of great tribulation.

As I’ve taught for many years concerning the 3 1/2 years of great tribulation, the ancient prophet said “Come, my people, enter your chambers, and shut your doors behind you; hide yourself, as it were, for a little moment, until the indignation is past. For behold, the Lord comes out of His place to punish the inhabitants of the earth for their iniquity; the earth will also disclose her blood, and will no more cover her slain. In that day the Lord with His severe sword, great and strong, will punish Leviathan the fleeing serpent, Leviathan that twisted serpent; and He will slay the reptile that is in the sea” (Isa. 26:20-21 and 27:1). The parallel to this prophetic Word is found at Christ’s discourse at Luke 17:20-37 with special emphasis on verse 37, the saints’ passage to safety. The second parallel is Matt. 24:15-28 with emphasis on verses 26 and 28.