When God said “That which has been is what will be, that which is done is what will be done, and there is nothing new under the sun. Is there anything of which it may be said, ‘See, this is new’”? It has already been in ancient times before us” (Eccl. 1:9–10), its truth applies to us, to not make the same mistake of unbelief as did those of ancient Israel who perished accordingly. 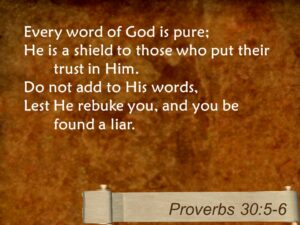 Consider that “Jude, a bondservant of Jesus Christ…to those who are called, sanctified by God the Father, and preserved in Jesus Christ…[said by the Spirit] I want to remind you, though you once knew this, that the Lord, having saved the people out of the land of Egypt, afterward destroyed those who did not believe” (Jude 1:1, 5). [Bold emphasis added]

God didn’t destroy the Numbers 13, 14 generation of Israel because they didn’t believe IN God; He destroyed them because they didn’t BELIEVE God, a great difference. And today, like then, many believe IN God, but do not BELIEVE God, specifically in context to the testimony of Jesus Christ for His elect possessing their inheritance “Immediately after the tribulation” (Matt. 24:29–31) because they’ve been led to believe a pre-tribulation rapture tradition for which not a single verse of Scripture can be found, being deceptively cloaked in assumption and conjecture.

True believers look forward to possessing their heavenly home, the New Jerusalem, just as the Jews of ancient Israel looked for their Promised Land when God delivered them from bondage to Egypt, symbolic of believers’ deliverance from bondage to sin and the god of this age. We must guard our hearts against unbelief for receiving our inheritance, lest we fall into unbelief as did most of ancient Israel. Therein we have one of God’s warnings given through the apostle Jude.

In God’s love and mercy He saved His ancient people out of Egyptian bondage, yet when the time came to possess their Promise and saw the giants in Canaan, they no longer believed God, and thus, God “destroyed those who did not believe”. That truth must warn us to not fall into unbelief. But the pre-trib rapture deceptively seduces unto unbelief of Jesus’ testimony for His elect. The ancient example is clear: when the Church sees Antichrist, like ancient Israel saw the giants, the offense of Matt. 24:10 will occur unless the Church repents and turns from unbelief, because “That which has been is what will be, that which is done is what will be done”.

It must be noted that God said “I am the Lord, I do not change” (Mal. 3:6), and the Holy Spirit said “Jesus Christ is the same yesterday, today, and forever” (Heb. 13:8). Whatever God did in ancient times, He will do again because He does not change. That should be sufficient to deter ignoring the testimony of Jesus Christ for His return and the gathering His elect saints.

The Holy Spirit plainly said, “I want to remind you, though you once knew this, that the Lord, having saved the people out of the land of Egypt, afterward destroyed those who did not believe”. Before 19th Century John Nelson Darby’s epiphany of a pre-trib rapture, saints in the Church BELIEVED and prepared in the testimony of Jesus Christ for the person and reality of the Antichrist and the seven-year tribulation. But as it now stands, most believers in the Western Church believe the lie of the ages – Satan’s final and greatest deception, and will thus be caught outside the safety and provision of God as promised at Revelation 12:6, 14.

And Paul also warned, “I do not want you to be unaware that all our fathers were under th 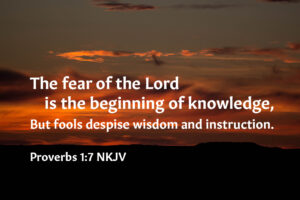 e cloud, all passed through the sea, all were baptized into Moses in the cloud and in the sea, all ate the same spiritual food, and all drank the same spiritual drink. For they drank of that spiritual Rock that followed them, and that Rock was Christ. But with most of them God was not well pleased, for [destroying “those who did not believe” (Jude 1:5)] their bodies were scattered in the wilderness…Now all these things happened to them as examples, and they were written for our admonition, upon whom the end of the ages have come” (1 Cor. 10:1–5, 11).

Today, like those in ancient Israel who brought “a bad report” (Num. 13:32), putting fear into God’s people because of the giants that occupied their Promised Land, false teachers exchange the testimony of Jesus for fear of Antichrist and the seven-year tribulation. Thus, false teachers silence Jesus’ testimony making believers unprepared to endure to the end as Jesus taught at Matt. 24:13, promising, instead, a pre-tribulation rapture. Thus, Christ’s end-time teachings are made “of no effect” as Jesus taught at Mark 7:8, 13 regarding traditions of men.

Dear believer, God wants you and me to believe and prepare in the testimony of Jesus Christ, and find the safety and provision of God for the last 3 1/2 years of great tribulation. But if we don’t believe the testimony of Jesus, we have no reason to prepare to endure to the end as our Lord Jesus taught. Decide today to study to show yourself approved, to know the truth which makes you free, and to have no fear, whatsoever, of Antichrist or the seven-year tribulation. If we believe God, THEN He is for us, and if He is for us, who can be against us? Nobody! Not Antichrist or his demonic hordes from the bottomless pit! Bless the Lord, O my soul!