Jesus said “I am the way, the truth, and the life. No one comes to the Father except through Me” (John 14:6); and He also said that “unless one is born again, he cannot see the kingdom of God” (John 3:3); and that He gathers His elect “Immediately after the tribulation” (Matt. 24:29–31). Yet, since the mid-19th Century the evangelical church silenced the latter of the three above quotes because Jesus doesn’t agree with their tradition of a pre-tribulation rapture.

As a result most Christians today believe the pre-tribulation rapture, the easy road to heaven, deceptively ridding the believer of God’s promised 7-year tribulation. It’s the opposite of what Jesus promised His elect for the time of the end. It’s one of numerous rebellions and a sign of the times as academics have carved out the end-time witness of Jesus and made it of no effect for the Church, deceiving the majority just like the fearful made the majority of ancient Israel disbelieve God in response to their “bad report” at Num. 13:32, and they subsequently perished.

But prophetic biblical end-time events continue unfolding, and God’s heart is grieved for the millions of professing Christians, who, having been led by false teachers are not prepared to endure to the end. Thus, many Christians have no interest in hearing about or studying end-time truths. The general consensus in the Church is, “Why spend time studying end-time events and the tribulation since we won’t be here for it anyhow”? But the truth is, unless we die beforehand, we will all be right here on earth to see Antichrist and endure the tribulation. And Jesus said “he who endures to the end shall be saved” (Matt. 24:13).

Anyone aware of the signs of the times from a biblical perspective knows that not only is the Christian faith under attack like never before, but the earth groans in travail of earthquakes, volcanoes, disastrous weather, wild fires, and poisoned oceans. Once-beautiful cities like San Francisco, CA, and Seattle, WA have now become a scourge of homeless drug addicts, human waste, violence, theft and squalor; this is the New World Order; evil spirits of the days of Noah and Lot unleash their dreadful end-time PRIDE and LGBTQP+ perversions, violence and terrors to destroy humanity made in God’s image, as the Restrainer, God, lessens His restraint.

The world’s hatred of true Christians is growing exponentially worse which is the result of God’s promise at Dan. 7:21 and Rev. 13:7; that the spirit and person of Antichrist make war against the saints “and overcome them”. They are rebellious false teachers who tell you world conditions will become better as Christians make the world fit for the Lord’s return. They lie! “Therefore ‘Come out from among them and be separate, says the Lord’” (2 Cor. 6:17).

Soon, when the Second Seal of Rev. 6:3–4 is opened, the world will be pitched into WW3. It could begin with Iran or China and the United States. If so Iran will strike Israel in retaliation, which will likely draw Russia, an ally of Iran, to descend on Israel in the Ezekiel 38 prophetic war of Gog and Magog. Chaos such as this will be the seedbed for the arrival of Antichrist to aright global problems, “And all the world marveled and followed the beast” (Rev. 13:3).

Today, on the twelve-year anniversary of the www.thefridayletter.com I invite you to view this short eight-minute video, A call to arms, and prepare in heart, mind, spirit and soul for the end of the age now upon us. Dispose all thoughts of a pre-tribulation rapture because it’s the lie of the ages, forged by hell’s forces to deceive God’s elect, to keep us from finding the Rev. 12:6, 14 safety and provision of God for the last 3 1/2 years of great tribulation. Now is the time to prepare, not when we are in the chaotic tribulation and manifold destructions.

Have a plan and know what you will do before tribulation chaos hits. Provide for and teach your family as God commands. Lead them to the shelter of the Most High when our Lot-moment and very brief opportunity to escape arrives. Lead your family to be found “worthy to escape all these things that will come to pass, and to stand before the Son of Man” (Luke 21:36).

There is only one absolute Truth, and His name is Jesus Christ, and His testimony is validated by His Spirit-filled apostles who wrote the New Covenant Books of the Bible. The apostles all agree with the testimony of Jesus, and He with their testimony. So, in truth, the New Covenant gospel is ALL the testimony of Jesus, if not by His own mouth, then by His Holy Spirit, for “holy men of God spoke as they were moved by the Holy Spirit” (2 Peter 1:21). 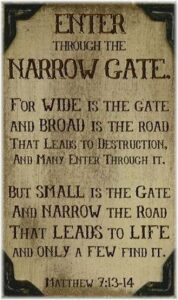 We must not believe the fruitless traditions of men, which Jesus said make the word of God of no effect. We cannot expect to endure the 7-year tribulation before us if we don’t prepare in the testimony of Christ. Millions of Christians are counting on the pre-tribulation rapture being true, but it will instead be the root cause of terrible offense and suddenly lead “the falling away” (2 Thess. 2:3) when the Antichrist is revealed.

While God said that no one knows the day or hour of Christ’s return for His elect, Matt. 24:36, He has, however, given us very specific numbers of days that account for the 7-year tribulation. Specifically, the first 3 1/2 years of the tribulation is revealed as “one thousand two hundred and sixty days” (Rev. 11:3), the time in which God’s two witnesses prophesy before they are killed. And the second 3 1/2 years of the tribulation, which Jesus identified as “great tribulation, such as has not been since the beginning of the world until this time, no, nor ever shall be” (Matt. 24:21), is also identified as being “one thousand two hundred and sixty days” (Rev. 12:6), when the true Church flees to her place in the wilderness where she is nourished by God, see also Rev. 12:14.

In this context please consider printing off a seven-year calendar, whereby you mark off the days starting with the Dan. 9:27 “covenant with many”, that you might know the exact day that begins the second half, or “great tribulation”, which is the brief window of opportunity for saints to flee to the provision and safety of God as Jesus described at Matt. 24:15–28 and Luke 17:20–37 and Rev. 12:6, 14. Then “Immediately after the tribulation of those days…He will send His angels with a great sound of a trumpet, and they will gather together His elect from the four winds, from one end of heaven to the other” (Matt. 24:29–31). Jesus returns to gather His elect in one of the following unknown 75 days according to Dan. 12:11–12.